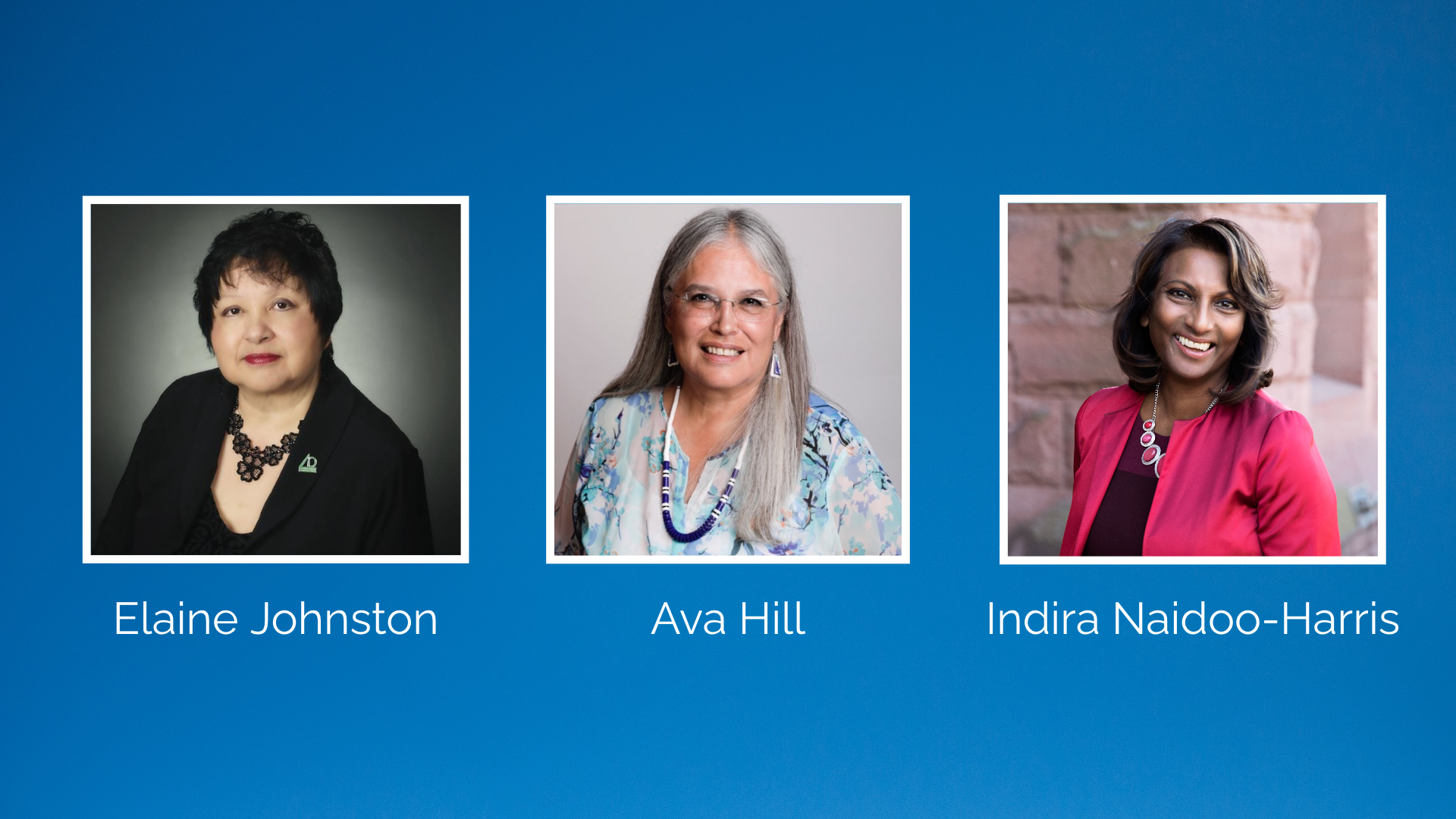 In part 1 of this two-part series, we hear the women discuss their careers and the obstacles they have faced along the way.

Elaine Johnston is of the Turtle Clan from Serpent River First Nation.  Waawaaskonkwe is her Anishnawbe name given to her by her Great Grandmother Annie which the Elders advise her is her identity and purpose on Mother Earth. Elaine is a proud Anishnawbe women and she is the eldest of 11 women. Elaine’s role models have been her Grandmothers Agnes Commanda who was a traditional midwife/healer, Grandmother Verna Johnston who was involved in the development of many Indigenous agencies in Toronto and her Father Peter Johnston who was Chief and Band Manager of Serpent River First Nation.

Elaine served on Band Council for 10 years as a Council member and as Chief for 5 years.  She attended post secondary education at Cambrian College and Sudbury Laurentian University and received training as an Ambulance & Emergency Care Attendant and Paramedic along with her diploma and degree in nursing.    Her career in health as given her opportunities to work in the hospital, ambulance, air ambulance, community, the Canadian Coast Guard, government and First Nation organizations.  She worked at the Assembly of First Nations, the Anishinabek Nation and locally at the North Shore Tribal Council.  Elaine has served on numerous Boards and committees at the local, regional and national level.  She presented to the United Nations, the Royal Commission on Aboriginal Peoples and to numerous standing committees, to name just a few.  She is a passionate advocate for the needs of the First Nations and Indigenous people and welcomes the opportunity to champion actions for change.

Indira Naidoo-Harris is a trusted public leader, policy-maker, journalist, and advocate. Currently serving as the AVP of Diversity & Human Rights at the University of Guelph, Naidoo-Harris is working to foster a culture of inclusion by leading discussion and education efforts about inclusivity, equity and accessibility.

She was elected to public office in 2014 as Halton’s MPP and she held several cabinet posts, including Ontario’s first ever Minister of the Status of Women, and Minister of Education.

Naidoo-Harris has developed and worked on policies, strategies and frameworks that have changed lives including Ontario’s Renewed Early Years and Childcare Policy Framework, the Strategy to Deliver Free Preschool Childcare for Children in Ontario, Ontario’s first Comprehensive Dementia Strategy, and the Ontario Retirement Pension Plan.

As the first official voice for women in the province, Naidoo-Harris headed the Women’s Economic Empowerment Strategy and the Strategy for Gender-Based Violence. She also worked on anti-human trafficking legislation, led consultations across the province with women’s and Indigenous groups, victims of violence and social reformers, and worked with business and government officials on pay equity and other issues.

She also served as Associate Minister of Finance, and Minister Responsible for Early Years and Child Care. Naidoo-Harris currently serves as an Advisory Board member for the Pearson Centre for Progressive Policy and is an Honorary Member for the Canadian Ethnic Media Association and Host of the Milton Film Festival. She has co-hosted the Federal, Provincial, and Territorial talks on the Status of Women, and is a former Board member of the Nelson Mandela Children’s Fund and the Reelworld Film Festival. Naidoo-Harris is considered an expert in education, equity, diversity, inclusion, women’s issues, immigration, economic recovery and COVID-19 supports and is a regular host and panelist on numerous national webinars.

Before entering politics, Naidoo-Harris was an award-winning journalist in Canada and internationally with outlets including NBC, PBS, CBC, OMNI, TVO and CTV.

Ava has extensive experience working with First Nations and Indigenous organizations (regionally, nationally and locally) in both a volunteer and professional capacity. She served as the Executive Director of the Chiefs of Ontario Office, the Executive Assistant to the National Chief of the Assembly of First Nations and the Executive Assistant to the Co-Chair of the Royal Commission on Aboriginal Peoples. She also spent some time in Saskatchewan working for the Wahpeton Dakota Nation and the Prince Albert Grand Council.

During her tenure on the Six Nations Elected Council Ava sat on many of the internal and external committees. She was the Six Nations representative on the Aboriginal Leadership Partnership for the 2015 Toronto Pan Am Games. She was Six Nations representative with the Iroquois Caucus and has been active on international files attending the United Nations Permanent Forum on Indigenous Issues for the past few years. She also participated in the Global Preparatory Meeting, which was held in Alta, Norway, in preparation for the World Conference on Indigenous Peoples that was held in New York City in 2014.