Cumberland Strategies Announce the Addition of 3 New Advisory Board Members 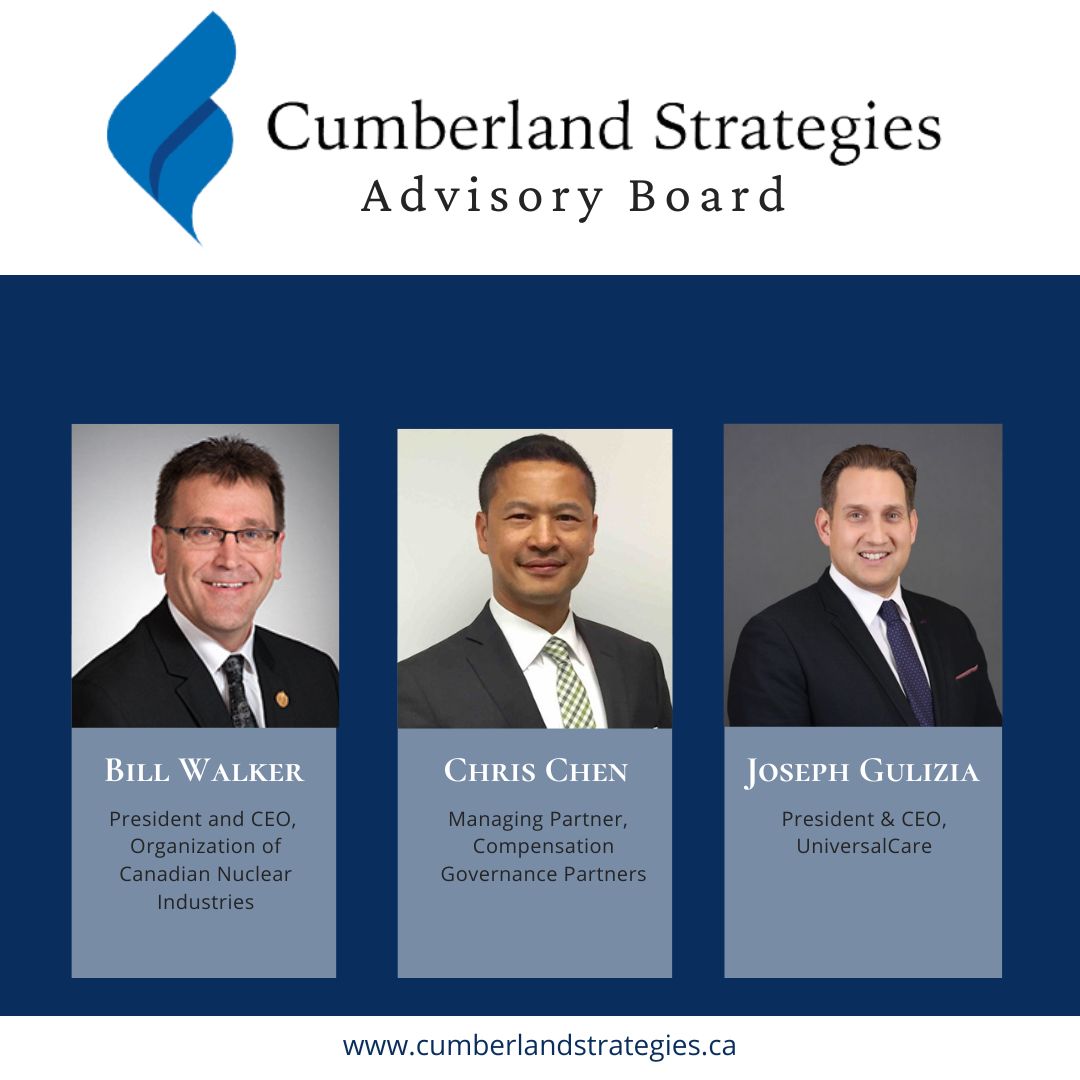 Cumberland makes the announcement at its Advisory Board Meeting in Toronto

Toronto, Canada – Cumberland Strategies, a leading in public affairs, government relations and strategic communications firm, announced the addition of three new members to its Advisory Board at its board meeting in Toronto.

The new board members Bill Walker, Chris Chen, and Joseph Gulizia will bring Cumberland’s advisory board experience from the healthcare, government and corporate finance sectors.

Bill Walker, is the President and CEO of the Organization of Canadian Nuclear Industries. Prior to OCNI, Bill was a three-term Member of the Ontario Provincial Parliament for Bruce-Grey-Owen Sound where he held several different roles in Premier Ford’s Cabinet, including Associate Minister of Energy, Minister of Government and Consumer Services and Chief Government Whip.

Prior to his election to provincial parliament, Walker worked as Operations Manager at Bruce Power, and was Executive Director at the Bruce Peninsula Health Services Foundation.

Chris Chen, is the Managing Partner of Compensation Governance Partners where he advises boards and c-suites on supporting stakeholder value through effectively aligning organizational strategy to executive pay.

Prior to CGP, Chris was the National Practice Leader of Executive Compensation at a multinational human resources consulting firm. As a lawyer and tax advisor, he provides deep technical and industry expertise to organizations ranging from the S&P/TSX 60 to not-for-profits.

Joseph Gulizia, is the President & CEO of UniversalCare, a long term care and retirement home operator. He has been involved in operating Long-Term Care, Retirement Homes, and Continuing Complex Care facilities since 1997.

Gulizia is a recipient of The Queen’s Diamond Jubilee Award (2012), City of Vaughan Volunteer of the Year Award (2013) and the 2015 Business of the Year – Young Entrepreneur Under 40.

“We are thrilled to welcome Bill, Chris, and Joseph to our Advisory Board. They are going to add tremendous value to the business with their wide range of expertise from both the public and private sector” said Bliss Baker, Chairman of Cumberland Strategies.